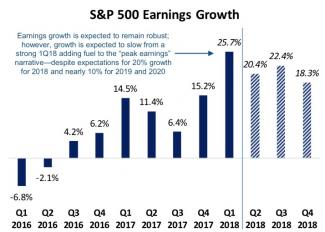 Another Underwhelming Earnings Season? Yes and No

First Q 2018 earnings for S&P 500 companies reported an amazing 26% year-over-year earnings growth!! (See first chart, Source: CFRA S&P, The Outlook, July 2, 2018.) But the stock market shrugged. While CFRA S&P, a research firm, expects the second-quarter numbers to be as impressive as the first quarter and future profit guidance to be decent, they think the response from stocks will more likely resemble the reaction received after first-quarter results. “On average, companies that beat both top- and bottom- line expectations in the S&P 500 only traded 0.1% higher on the day they reported results, and many traded down sharply on the release.”

So, on aggregate, if U.S. companies are reporting all-time high record profits (see second chart, Source: Compustat, FactSet, Standard & Poor’s, J.P. Morgan Asset Management), why were year-to-date returns for S&P 500 companies barely 3%? There are of course many plausible reasons, and here are my thoughts:

In conclusion, I am cautiously optimistic for stocks this year. I don’t expect double-digit returns, but I think the good news will still outweigh the bad in the near-term. However, I think there is a good probability of a recession in the next few years. Most, but not all, stock bear markets are a result of a recession, but we don’t currently see a recession around the corner in the next 6-12 months.