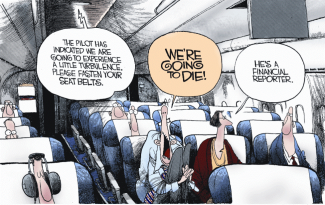 Fear sells. We all know it, and so do advertisers, politicians, and news media reporters and their editors. I recently stumbled across this financial cartoon by Michael Ramirez, and I thought it aptly describes our current situation in the financial news media.

Will we have a recession in the coming six – 24 months? Maybe.

Can we as humans and consumers talk ourselves into a recession? Absolutely!

What do I mean by the latter question? Nobel prize-winning economist Dr. Robert Shiller’s recent book Narrative Economics: How Stories Go Viral and Drive Major Economic Events discusses the idea how the stories people tell – about economic confidence or recession, housing booms, or Bitcoin – can affect real economic outcomes. For example, the constant news drumbeat of a recession can lead people to think a recession is likely or imminent. If so, this causes people to reduce their spending in order to protect their finances. Given that the U.S. economy is ~70% reliant on its consumers, people significantly curtailing their spending could lead to a self-fulfilling prophecy. (See Google Search chart)

I am not trying to minimize the risks that exist in our U.S. and global economy, but I am always trying to put things into perspective and probabilities. Presently, “the global economy is now in a synchronized slowdown,” said Kristalina Georgieva of Bulgaria, head of the IMF (International Monetary Fund) a few weeks ago. Two years ago, the global economy was in the midst of a synchronized acceleration. The present deceleration doesn’t necessarily mean we will slip into recession, but this is, of course, the question “du jour”.

Bloomberg Economics (Source: https://www.bloomberg.com/graphics/us-economic-recession-tracker/) estimates about a 25% chance of a recession within the next 12 months (see chart, dated 10/23/19). Other economic forecasters that I read basically give the same probability (plus or minus 10%) at this juncture. But remember, no human, collection of humans (read: economists or investment managers) or sophisticated computer models (which are built by humans!) can predict the future.

So, is there any good news out there!?!? Why yes there is! The American consumer and the U.S. labor market look healthy by most metrics. Plus, this year most central banks around the world, including the U.S. Federal Reserve, are lowering interest rates and/or injecting money into the financial system as “insurance” against the slowdown. This is in contrast to the last couple of years when central banks were raising interest rates and/or pulling money from the financial system. These recent moves will not guarantee we dodge another recession like we did in 2011 and 2015, but they could help extend the U.S. and global expansion… and by extension the stock market.

The BlackRock U.S. financial conditions indicator (FCI), chart included as of 10/21/19, gives a forward view of where our economy may head (FCI is the green line). (Source: https://www.blackrock.com/corporate/insights/blackrock-investment-institute/interactive-charts/macro-dashboard#financial-conditions) This is known as a leading financial indicator. There are others by Bloomberg and Citigroup, and they basically show the same upward movement. It presently shows a pending uptick in our economy, somewhat driven by the actions of the global central banks mentioned above. We’ll find out in the months ahead if the Blackrock FCI is correct.

In the meantime, we have had numerous conversations with clients about the possibility of a recession and bear stock market. This isn’t because I believe with 100% certainty one is right around the corner, but rather proper, proactive advisor-client discussion to make sure 1) you are aware of the potential risks and 2) reaffirm your investment ‘game plan’ in terms of how much stocks and bonds you should own, given both your short- and long-term goals. As always, you do not need to wait until our next meeting if you would like to discuss your portfolio.

Lastly, I encourage you to read Bryson’s article about passive vs. active investing if you would like to learn more about why we invest your portfolios the way we do. Short answer, it’s research based! ?