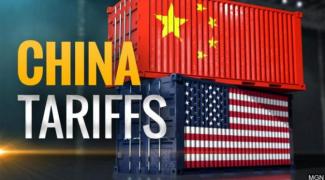 The U.S. Administration is in continuing negotiations with China over tariffs and other trade-related issues.  Currently, trade talks are stalled. U.S. restrictions on telecom gear maker Huawei Technologies remain a sticking point, and the threat of more tariffs still looms. Because tariffs are not the only issue, reaching a deal that includes tariffs, U.S.  intellectual property protections, easier access to Chinese markets, and technology security will be difficult.

Most of the analysts we read believe the U.S. and China have firmly entered a new phase in our competitive relationship. What has changed? The U.S. and our global trading allies have long complained about China’s trade and intellectual property policies. Trump has made these complaints a centerpiece of his agenda; plus, these issues have united most U.S. politicians against China, which in our era of hyper-partisan politics is notable. This means that Trump, for now, has the latitude to play “hardball” with China by putting them on the defensive with tariffs and restrictions on two of its biggest tech companies, Huawei and ZTE. This potentially has serious ramifications for global trade, global security and technology. I found this Venn diagram during my reading that illustrates how trade is only one issue in our complex, competitive relationship with China.

Structural U.S.-China competition is at the center of geopolitical uncertainty. The U.S. and China have entered into a strategic competition that we see as structural and persistent. The tensions go beyond trade, extending to strategic concerns over domination of next-generation technologies and their implications for national security. The fallout is a potential rollback of decades-long globalization trends that gradually lowered inflation and expanded corporate profit margins. (Source: Blackrock, Global Investment Outlook, July 2019)

Our relationship with China is complex. Both the U.S. and China, and the rest of the world, have benefited from global trade. Much of the world’s growth over the past 20 years is due to China. China’s rise and advancement is based on moving up the value chain, restricting access to foreign companies so its domestic companies can catch up. In other words, China wants to design and make semiconductors and supercomputers, not cheap clothes and toys. This is how a country develops technological knowhow and becomes wealthier over time. Currently, we don’t see China substantially changing its economic development plan, and this will make it harder for China to agree to some U.S. demands.

Regarding the economic impact of a “no deal” between China and the U.S., economists have tried to assess the potential impact of high, sustained tariffs. The economic studies suggest this scenario will dent U.S. and global growth but not enough to push the U.S. or the world into a recession by itself.

A few studies in recent months have attempted to quantify the impact of new tariff actions from countries such as the U.S. and China. These studies have suggested an economic growth level reduction of around 0.3% in 2020 for both the U.S. and the pan- European economy compared to the previous status quo of no new tariff implementation. The suggested negative impact on Chinese economic growth levels is a little higher at over 0.5%, but in the wider scheme of things, this is a nudging down of economic growth rates, not an immediate precursor to economic recession. (Source for quote and chart: Chris Bailey, European Strategist, Raymond James, June 2019.)

So, what’s the bottom line? Though it appears a U.S. vs. China trade war won’t derail our global economy, business leaders, politicians and economists are already speculating how our competitive relationship will change our respective countries, as well as global supply chains, technology access and competition and globalization in general. While we hope Trump and Xi can find a compromise, we admit it may be difficult given the breadth of issues on the table.