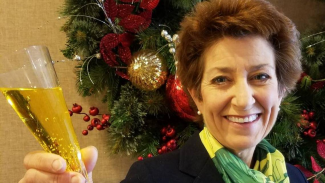 Is it Your New Year’s Resolution to Retire?

New Year’s resolutions will be upon us soon. You may decide that the angst from the job is becoming too onerous.

Last December, clients Mike and Darla came in for their meeting and told us Mike was retiring in a year. Darla was already retired; they wanted to tackle their bucket list together. But their 2014 retirement projection had not been promising.

Mike is stepping down this month. Their late 2017 and late 2018 retirement projections improved. How did they do it?

Keep in mind that we handle health care outside of this figure because those costs increase at a faster rate. We did tweak buying cars from every five years to every seven.

This was adding five years of part-time income. Back in 2014 we’d discussed that just trimming expenses probably wouldn’t be enough. We’d asked them to consider part-time work. Mike decided that retiring earlier but working part-time for four years was most palatable.

This was our advice to Darla to start collecting a Social Security benefit on her work record and for Mike to file for 50 percent spousal benefits when he’s 67. In the ensuing four years, Mike’s benefits grow at 8 percent per year.

At 70 he’ll collect on his own record.

This maximizes their Social Security benefits while considering Darla’s less-than-perfect health. (Restricted application is a strategy that only those born before 1954 can still use.) We added these various payments to their retirement projection.

Mike will get a monthly pension check from his company. That check is larger now in 2018, than we originally anticipated in 2014.

Mike and Darla own a rental house. We asked them for a rate by which they felt they could raise the gross monthly rent. Eventually they’ll pay off that mortgage, increasing their bottom line.

What about saving more?

In 2014, Mike and Darla had taken our recommendation to step up savings into the 401(k.) We didn’t advise a second increase in early 2017 because a single year won’t move the needle much.

Can you do it?

New Year’s resolutions get you and your advisers focused. Sometimes a goal takes several steps, some big, some small. If you’re getting the itch to step down from the 8-to-5, start planning, explore options, and develop an approach that works for you.

Sandi Weaver, CPA, CFP, CFA is a CERTIFIED FINANCIAL PLANNING professional and member of the Financial Planning Association of Greater Kansas City. She is a senior adviser at Petrovic Weaver Financial Services on Corinth Square in Prairie Village.