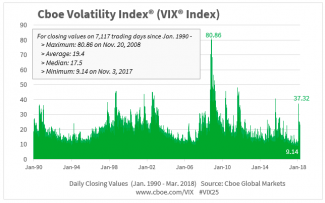 Read All About It! The Dow Slides 500 Points Today

Financial advisors are saying “no” for most investors. “Perhaps a shift” for a few. Here’s why.

We’ll use the Dow Jones Industrial Average, the DJIA, since most folks still focus on that market index. It’s around 24,500 this week. Right now, it’s down 100 points, as I write. That is a percentage drop of .4 of 1%, peanuts. But yesterday the Dow had a huge swing, and gained 430 points. That’s still just 1.8%. On February 5th, the Dow dropped 1,175 points, or 4.6%, the largest plunge in its history. Volatility is back.

What’s going on? If you look at lists of the largest point up days or the largest point down days, nothing in 2017 shows up. The year was smooth sailing. Nothing in 2016 shows up. More smooth sailing. You have to recall 2015 before you regain the typical upswings and downswings of the market. We’ve had a string of reasonably good corporate earnings growth and low interest rates, strong proponents for the market, with reasonably few worry spots. (Even though Trump’s tweets are disruptive, he’s pro-business.)

At your review meetings, we’ve been saying a market correction of 10% or more may be likely, based on our readings. We didn’t see that in 2017. The last correction we saw was in January 2016, over two years ago. The correction prior to that was in 2011, over 7 years ago. We’ve been livin’ the dream with low/no volatility!

Another way to measure the angst rattling investors this year is by watching the VIX index. This measures expectations of volatility (large ups and downs) in the S&P 500 index. In 2008 the VIX hit a high of 81. Prior to then the worst period of expected volatility measured 38 in 2002. Right now the VIX is at 19, as I write. The VIX was closer to 11 during most of 2017. The average VIX level during bull markets? That’s 18, close to where we are now.

Why do most advisors say investors needn’t make changes because of the normalized volatility we’re seeing? Because most investors have a diversified portfolio of low-risk bonds and higher-risk stocks. Most investors have a long-term time horizon, and don’t invest for a year at a time. Most investors have made a decision that they’re conservative or moderate or aggressive. If you’re not sleeping at night because of the market’s ups and downs, a change in your long-term risk level may still be needed. But educate yourself on the market’s typical patterns and set your risk level for that, rather than reacting to the news headlines.

Here’s a reality check for us. The average bear market lasts 1.4 years and the market drops -41%. Gut-wrenching! A plunge from a geopolitical event, such as the war in Kuwait, is often less sharp but quicker; the pain is over sooner. But remember that the average bull market lasts 9 years wherein the market rises 480%, according to First Trust’s information.

Invest for the long term, not today’s news headlines.